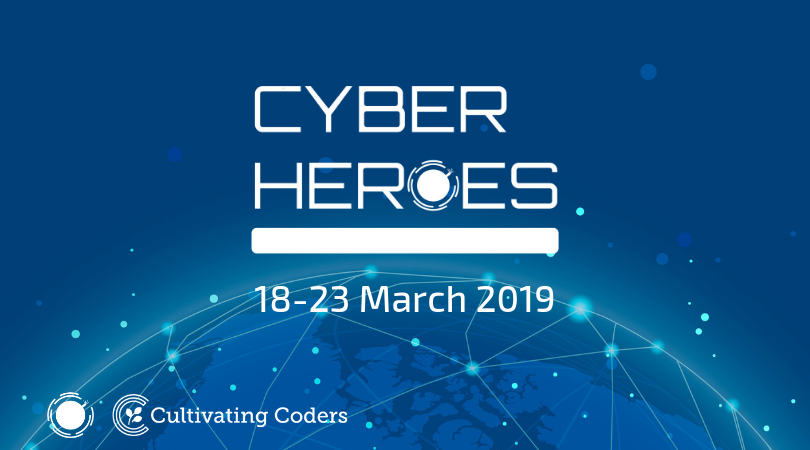 CyberHeroes is a one-week training program (18-23 of March) that brings together twenty talented youngsters from The Netherlands and New Mexico, USA. Together they will be trained in ethical hacking skills to address current security threats. Over the course of one week, they will take on hacker battles, work on CSI-type cyber challenges with local police, study the history of cryptography, learn to fight cyber crime alongside international hackers, and much more.

CYBERWORKPLACE is a non-profit initiative based in Rotterdam, the Netherlands that helps reduce the current shortage of cyber security experts in the labor market by providing in-demand 21st-Century coding skills to vulnerable youth populations.

The program is built upon modern teaching methods including peer-to-peer techniques and project-based learning.

Cultivating Coders is on a mission to build a pipeline of talented coders poised to solve local problems and advance along career pathways. Our core expertise is providing rigorous technology training and workforce preparation services to under served communities. Incorporated in Albuquerque, New Mexico in 2015, we’re blazing trails from rural America to inner-city neighborhoods by taking computer science camps to young people in overlooked communities.

ANOUK VOS is Chairman and Co-Founder of Cyberworkplace. She is also partner and Cyber Security /Innovation lead at Revnext, a strategic consulting firm focusing on high-tech issues, offering cross-sectorial, thoroughly substantiated, and objective advice in the realm of cyber security.

Anouk has ten years of experience as a strategic cyber security advisor for (inter)national government bodies, multinationals, and NGOs. Amongst others, she has worked at the Ministry of Foreign Affairs, the National Cyber Security Centre, and as a Cyber Security lead of a strategic advisory office.

She won the Lof Spotlight prize for Female Leadership in 2015 and has been elected as one of the Inspiring Fifty in 2016 and 2017, the fifty most inspiring women in the technology sector. In 2017, she won the title of Business Woman of the Year in Rotterdam in the category of “Upcoming Talent.” In 2018, she was voted one of the 50 most influential women in cyber security by SC Magazine. In her work, she positions cyber security before the process rather than as an afterthought.

CHARLES ASHLEY III is the Chief Executive Officer and Founder of Cultivating Coders,  a New Mexico-based company that provides technical training and curriculum in web and mobile application development to K-12 schools in tribal, rural , and overlooked urban areas that lack resources in coding and computer science education.

Prior to his current role, Charles was a Marketing & Strategy Consultant for several clients including  Harmonix Technologies, VARA Wines and DeVry  University. He previously served as Film Liaison & Marketing Manager for Bernalillo  County’s Economic Development Department in New Mexico and was Manager of Marketing for CNM’s STEMulus Center.

PHILIP R. ZIMMERMANN is the creator of Pretty Good Privacy, an email encryption software package. Originally designed as a human rights tool, PGP was published for free on the Internet in 1991. Despite the lack of funding, the lack of any paid staff, the lack of a company to stand behind it, and despite government persecution, PGP nonetheless became the most widely used email encryption software in the world.  In 2002 PGP was acquired from NAI by a new company called PGP Corporation, where Zimmermann served as special advisor and consultant until its acquisition by Symantec in 2010. Since 2004, his focus has been on secure telephony for the internet, developing the ZRTP protocol and creating products that use it, including Silent Phone and Zfone. Zimmermann is Co-founder of Silent Circle, a provider of secure communications services.

Zimmermann has received numerous technical and humanitarian awards for his pioneering work in cryptography. To name a few, in 2015 he received the US Privacy Champion Award from the Electronic Privacy Information Center, in 2014 he was inducted into the Cyber Security Hall of Fame, and Foreign Policy Magazine named him one of the Leading Global Thinkers of 2014, and in 2012 the Internet Society inducted him into the Internet Hall of Fame.

Zimmermann now teaches crypto at Delft University of Technology’s Faculty of Electrical Engineering, Mathematics and Computer Science, in the Netherlands.

Melanie worked as a Senior Engineering Manager on XenClient at Citrix, where she led their Vancouver office. She was also the head researcher in the CSIRT at ING Bank, where she spearheaded their Analysis Lab and the ING Core Threat Intelligence Project.

For fun, she co-founded the Dutch Girl Geek Dinner in 2008. Melanie was named 2010 ICT Professional of the Year (Finalist) by WomeninIT, one of the 400 most successful women in the Netherlands by Viva Magazine (Viva400) in 2010 and 2017, one of the fifty most inspiring women in tech (Inspiring Fifty Netherlands) in 2016 and 2017, and the Most Innovative IT Leader by CIO Magazine NL (TIM Award) in 2017. Her company, Radically Open Security, was also named the 50th Most Innovative SME by the Dutch Chamber of Commerce (MKB Innovative Top 100) in 2016.

THE SEAPORT POLICE Rotterdam carry responsibility for the safety in the port of Rotterdam and on the port sites. The work of the seaport police focuses on nautical supervision, environmental enforcement, crime prevention, border surveillance and incident handling on the water.

The Seaport Police is working in close cooperation with the students at Cyberworkplace, where together they look at real criminal cases, the role cybersecurity has in the port of Rotterdam, different challenges on digital forensics, spoofing, and potential port-threatening cyberattacks.

Two very special members of the Seaport Police, Dirk-Jan Grootenboer and Peter Duin, will be taking the students on a patrol boat adventure in the Rotterdam harbor, Europe’s largest port.

DIRK-JAN GROOTENBOER works as a digital local police officer at the Seaport Police. Grootenboer aids in making the activity of the police transparent through social media and webcare. Grootenboer sets up, maintains, and strengthens already existing digital networks.

PETER DUIN has worked as a researcher for the police since 2004. He specializes in exploring cyberattacks, which is an area of growing importance, considering the increasing digitization within the port of Rotterdam. Duin’s work reflects his belief that everyone has the right to be protected from cyber-threats.

OSCAR KOEROO is currently working at the Dutch telco KPN in the Chief Information Security Office’s Strategy & Policy team. Oscar is responsible for the KPN Security Policy on the subject of identity, applied cryptography, system security, and network security. He advises the business at the operational level and strategic level to prevent attacks on KPN itself, its customers, and society.

FLOOR JANSEN is known for working on high-tech forms of cybercrime that are often committed by young, tech-savvy people on the dark side of the web. She is the co-founder of Hack_Right. Hack_Right is an alternative or additional penalty trajectory where young people aged 12 to 23 who are sentenced for the first time for a cybercrime can be eligible. The aim of Hack_Right is to prevent recidivism and further develop the cyber talent of young people within the framework of the law. Jansen is also a Strategic Advisor at the National High Tech Crime Unit of the Dutch police, and she started a NoMoreDDoS movement that is showing promising results.

MAARTEN VAN DUIVENBODE is the founder of Duivenbode ICT, an advice company (ZZP and MKB) in the IT field, focusing on cloud options, software choice ,and hardware delivery.  Duivenbode is also an ICT supplier and installer of camera security. Private customers can also be served in the field of WiFi optimization and camera security.  Duivenbode was also a co-founder of Adhesion Consultancy, a consultancy firm founded by 5 young entrepreneurs with the inspiration to support companies with their ongoing processes. Adhesion Consultancy adheres to the following four core values: independence, expertise, solution-orientation, and innovation.

“THANK YOU” TO OUR PARTNERS: 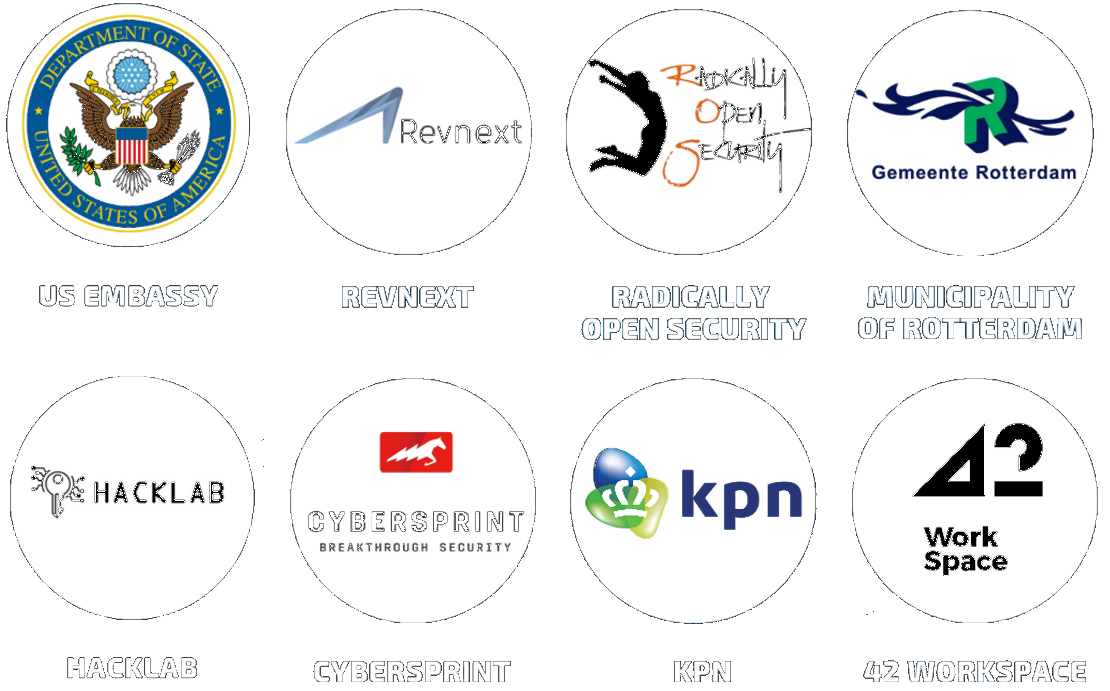